A Poem About Hard Work – Toil And Treasure 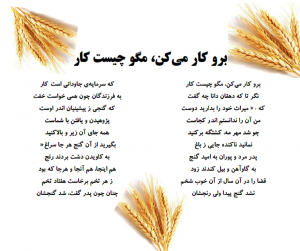 Toil and Treasure or in Farsi Ranj o Ganj ,is my favorite poem .

I learned it in the time when we lived in Iran and my son started school  at age 5 . We put him earlier in school because we lived in a town far away from family and the kids have been all the time only with me. I thought it is better if he goes to school and learns to know other kids and a better Farsi. Everybody told me ,he may not be able to make the first class because of the language ,but it went very good and I was able to learn to write and read with him. Some of the first poems he had to learn later were  “Toil and Treasure” from Mohammad-Taqi Bahar.

I love his poems ,they  are like guides for life . Hema’s post about hard work reminded me of this poem which always accompanied me in life.

Here it is ,it is about hard work and how hard work will be a treasure for us at the end.

Ranj o Ganj” (Toil and Treasure),
Its author is Mohammad-Taqi Bahar (1886-1951). known as malek al-Sho’ara (king of the poets),and perhaps
the greatest twentieth-century Iranian poet, writing before the advent of modernist poetry.

gained a treasure ,but it was maybe a bit different from what they thought. Hard work always brings a treasure

it has not to be gold and silver.

There are more poems of Mohammad-Taqi Bahar and one of it I only remember a part of it ,but it too has a timeless wisdom .

Will write about another time.

What do you think about this poem ?

I know there are similar poems in near every tradition.

Do you know one ?