Dr. APJ Abdul Kalam’s Childhood An Inspiration For The Youth

I like especially the little video which is a story from Abdul Kalam’s childhood and shows how perceptions can change.

Abdul Kalam grew up in Rameswaram, a little island in Tamil Nadu South India near to Sri Lanka. It is connected with a bridge, India’s most dangerous rail bridge, to the mainland.

Watch > PAMBAN BRIDGE – WORLD’S MOST DANGEROUS RAILWAY BRIDGE it is in Hindi but you can see the train coming on the bridge through the Sea. Video by Rahul Sihmar

Abdul Kalam was born in a Muslim family and was the youngest of 5 children. His father was a boat owner.
This poem for his mother in his book “Wings of Fire,” shows how Abdul Kalam felt. He was a loved child.

Mother
“I still remember the day when I was ten,
Sleeping on your lap to the envy of my elder brothers and sisters.
It was full moon night, my world only you knew Mother!, My Mother!
When at midnight, I woke with tears falling on my knee
You knew the pain of your child, My Mother.
Your caring hands, tenderly removing the pain
Your love, your care, your faith gave me strength,
To face the world without fear and with His strength.
We will meet again on the great Judgment Day. My Mother!

This is the story of my mother, who lived ninety-three years, a woman of love, a woman of kindness, and above all, a woman of divine nature.

My mother performed Namaz five times every day. During Namaz, my mother always looked angelic. Every time I saw her during Namaz, I was inspired and moved.”- Dr. APJ Abdulkalam

He said in his book, “I inherited honesty and self-discipline from my father; from my mother, I inherited faith in goodness and deep kindness, and so did my three brothers and sister.”

Abdul Kalam distributed newspapers as a young boy to support his family.

It is a Learn English – Story for Children after a story Abdul Kalam told from his childhood.

Abdul Kalam: “On the whole, the small society of Rameswaram was highly stratified and very rigid in terms of the segregation of different social groups. However, my science teacher Sivasubramania Iyer, though an orthodox Brahmin with a very conservative wife, was something of a rebel. He did his best to break social barriers so that people from varying backgrounds could mingle easily”.

The teacher was an excellent friend to Kalam and liked to chat with him. He said: “Kalam, I want you to develop so that you are on par with the highly educated people of the big cities”.
When he invited Abdul Kalam to a meal, the science teacher’s wife was horrified. She did not serve the meal for Abdul Kalam. So the teacher did serve the meal himself. And he stayed calm. But the next time, all had changed, and his wife served the meal for both of them.

The teacher said:” do not get upset. Once you decide to change the system, we have to confront such problems.

It shows he was a bright boy, and his teacher loved and supported him. 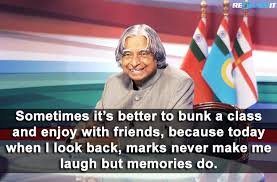 After the end of the world war, India was filled with optimism, and Abdul Kalam asked his Father for permission to leave and study at the district headquarters in Ramanathapuram.
He got permission, and his Father quoted Khalil Gibran for the worried mother:

“Your children are not your children. They are the sons and daughters of life ís longing for itself. They come through you but not from you. You may give them your love but not your thoughts. For they have their own thoughts”.

It is said Abdul Kalam grew up in a low-income family, but in my opinion, rich in hearts and beautiful souls.

The young Abdul Kalam went and tried hard to fulfill his Father’s and his own dream. He knew about positive thinking from his brother and was determined to reach his goals.

Abdul Kalam never married The great Indian scientist Dr. Vikram Sarabhai was a mentor of him.
He always took responsibility for what he did for failures or mistakes.

And he used to do at least one quote in every speech.
Here a few quotes:
“It is compassion, the most gracious of virtues, which moves the world.”

“If your thoughts are high, definitely you are going to work for your aim, definitely, you will succeed. But conversely, if you donít have an aim, donít have high thoughts, how can you aim at success”?

“When the rare chance comes, seize it to do the rare deed.”

“Although an act of help done timely, might be small in nature, it is truly larger than the world itself.”

Abdul Kalam was a practicing Muslim, but he knew Hindu traditions very well, and he read the Bhagavad Gita. The Bhagavad Gita is a philosophy, a way of life, not about religion.
Many famous people found answers it the Gita.
Abdul Kalam was truly an amazing man and liked to inspire young people. He was able to motivate the youth not only in India.

Dr. APJ Abdul Kalam also had a vision for India and wrote a book together with Dr. Y S Rajan. India 2020: A Vision for the New Millennium

A great man with a remarkable childhood.

Did you like the story of Abdul Kalam’s childhood? I like the part with the teacher breaking social barriers and changing perceptions.

Does it inspire you and motivate you to dream big?

Here is a video in Hindi, a friend visited Abdul Kalams Childhood house and place. The brother of Abdul Kalam is still with us and will celebrate his 103 birthday in 2019.