The Magician Parastu – A Story Of A Dream

The Magician Parastu- A Story Of A Dream

Years ago, maybe 20 + , we lived in Germany ,my husband has been working a
Company and young Iranian man started working and learning over there.

He was ambitious my husband invited him and hard worker and my husband
invited him for dinner .
He came and told us his story .It was not an easy way for him to come to Germany .
I liked that he despite all difficulties always was in a good mood and we started to
call him “Chandan”,which means, somebody who is always laughing

He came with us for hiking tours in south Germany and he liked to recite poems
for me ,like : “The Plum Tree” – Berthold Brecht .

One evening sitting together ,I asked him if he really liked this job and
what his dream is and he told me his heart’s desire is to be a Magician,
but everybody made a joke about this .
This was something I liked ,not everybody does really dare to dream like this .

Later he showed his tricks and I saw he was really talented and even more happy ,when he could show this .
He often came and helped us when work in the house and garden had to be done.
I started to invite him when we had guests with kids ,because he was creating amazing figures
and animals with balloons. After a while he got a few engagements for kids birthday parties .

I made Velvet bags for his equipment and a vest and we had an old “zylinder hut” from my grandpa.
He started to create shows with nice music .I knew some of the tricks and took care to make it better ,
because from near it is not easy to hide things like on stage,where magicians are far away fro publicum .
He got better and better and showed always happy his tricks .

Until one day after he had finished his study and exam ,he got fired ,because now the company
would have to pay him better. He lost his car as well and could not come like before .
I heard from other young friends ,that he is doing shows in the old town of Heidelberg,which is a
romantic city with a university . There is a pedestrian zone ,where
musician and other university students showed their talents. 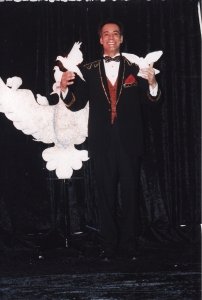 The Magician Parastu- A Story Of A Dream

Two weeks ago I got a message on Facebook ,somebody wrote in German :” Finally I found you “,
it was our friend Chandan , now Parastu ( dove ) the Magician 🙂
We had a Skype call and he showed me all the velvet bags and the vest and even my Grandma’s cupboard.
He said this is my treasures ,I cherish them .
He does shows in hospitals for the sick ,in Kindergarten on parties and…..

He is  a magician  and a clown.

This is the story of a Heart’s desire and a dream coming true .
Today 31.May is his Birthday ,this is his gift from me .

I hope you liked the story of Chandan the magician, he dared to think beyond his conditions and as we see ,
if you really want it, everything is possible.

We all have infinite possibilities. and deserve the life we Love living.

Do you have a dream ?
Would you like to live the life you love living?